Central Sudan, is perhaps the region that is the most diversified and colorful in its cuisine and dietary habits. This is due to its being a melting pot for the different Sudanese cultures and peoples, and to its exposure to external influences, like the effect of the British domination during the Condominium period. 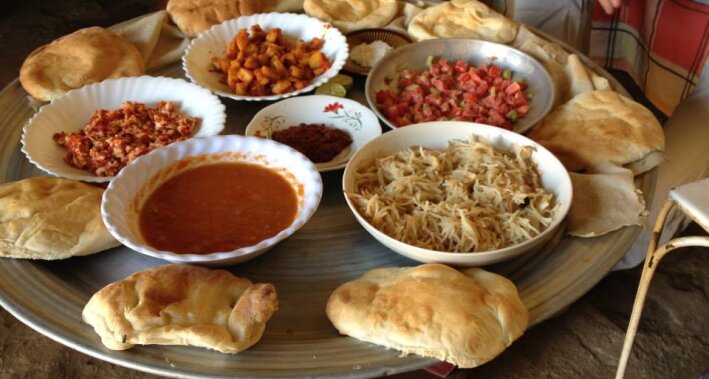 Societies always start with simple, unsophisticated types of food and gradually with their growth and development, they begin to improvise and discover more tasteful and sophisticated dishes, each depending on the types of new animal and agricultural discoveries.

After having established their basic cuisine, they tend to the development of complementary foods e.g. appetizers, desert and other foods, which allows for the emergence of a distinct cuisine.

The external influences on people’s dietary habits in Sudan could be mentioned here, for example, red pepper and other spices like garlic, pepper and others. They were brought to Sudan by the Syrian traders and Arab settlers from the Mediterranean who came to Sudan during the Turkish rule. They also introduced some dishes e.g. meatballs and pastries. Not only that, they also introduced some vegetables and fruits that were not known in Sudan.

It is of importance to note that the main staple of the Sudanese is a special type of bread called Kissra, which is made of durra or corn, Kissra is taken together with a stew and this has become the main dish in central and Sudan in general.

These stews are accompanied with porridge (Asseeda), which is made with wheat flour or corn. Other times Kissra is used. As for the popular appetizers in Sudan, there is (Elmaraara) and (Umfitit) that are made of parts of sheep like the lungs, liver and stomach. To these are added onions, peanut butter and salt, it is eaten raw.

Also other types of porridges are popular in Sudan which are made of wheat, Dhukhun and dates. They are taken together with milk, sugar and margarine. Soups are an important component of the Sudanese food, the most popular are Kawari’, which is made of cattle’s or sheep’s hoofs in addition to vegetables and spices. Also there is Elmussalammiya, which is made with liver, flour, dates and spices.

In spite of the fact that in the present, Northern Sudan is known for its simple cuisine, yet it could be of significance that historical evidence has proven that ancient Nubians were the first to discover wheat and from them, the world got to know about it. This explains the fact that wheat flour has still remained the staple food for the people of the north who use it in making their main dish (Gourrassa). It is made of wheat and baked in a circular shape, its thickness and size change according the needs.

Sudanese people are very hospitable. Meals are eaten around a large, communal tray on which various meat, vegetable, salad, and sauce dishes are placed. These are eaten with the right hand, using flat bread or a stiff millet porridge known as asida or kisra.

The strong Sudanese coffee is served from a special tin ‘jug’ with a long spout, known as a jebena. The coffee is sweet and often spiced with ginger or cinnamon, and is drunk from tiny cups or glasses. Fruit teas and herbal teas such as kakaday (hibiscus tea) are also popular.

Most people seem to have a very sweet tooth, piling several teaspoons of sugar into their cups of tea, and enjoying sugary desserts. Peanuts, known as Ful-Sudani, are a popular snack, and can be made into delicious macaroons.